Haiti: We Must Kill the Bandits, Review by Jeb Sprague 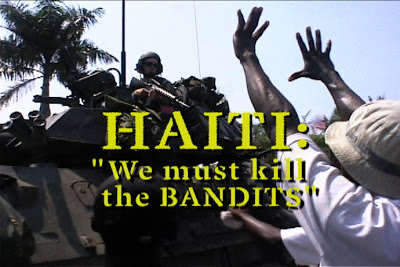 Placing himself and his camera between the gun barrels of masked death squads and UN accompanied Haitian police, Kevin Pina in his documentary “Haiti: We Must Kill the Bandits” (2011) shows what happened in the slums of Haiti’s capitol in the years leading up to it’s decimation by the January 2010 earthquake.  Following the 2004 coup that ousted Haiti’s democratically elected president, Jean-Bertrand Aristide, massive demonstrations pouring out from the impoverished slums of Cite Soleil, Bel Air, and other communities, challenged the interim authorities that had been put in place by the U.S, France, and Canada.

To halt the protests and barricade with barbed wire the poor into the slums, authorities carried out a campaign of political violence, targeting the popular Fanmi Lavalas movement and the neighborhoods where it was strongest.  Whereas most often violence against the majority poor goes unreported by the media, Pina along with local Haitian photojournalist Jean Ristil risked their lives, being jailed, beaten and threatened in acquiring the footage for this documentary.  Often with the only camera on the scene, Pina documents a U.S. and U.N. sanctioned campaign of political violence between 2004 and 2007- where Haitian police snipers shoot demonstrator after demonstrator, aiming for the head in state-sanctioned assassinations. The responses from UN and state bureaucrats ooze in condescension.
A documentary that should be viewed by all who are interested in Haiti and the Caribbean, where state-sanctioned violence has also recently exploded in the slums of Kingston, Jamaica, this documentary should be seen in tandem with Pina’s other films on Haiti: Harvest of Hope (1997) and Haiti: The UNtold Story (2005).  Together these films are amongst the most important documentation of the mobilization of the Haitian people at the turn of the twenty first century, starved of resources and braving the bullets of neo-Duvalierist gunmen and their foreign allies, Pina’s documentary is a testament to the human spirit and its quest for justice.


Posted by Haiti Information Project (HIP) at 4:45 AM No comments: