Who is Reginald Boulos, Martelly's "fixer" in Haiti?

Who is Reginald Boulos, "the Haitian businessman who headed the 11-member presidential commission Martelly appointed in November [2014]?" 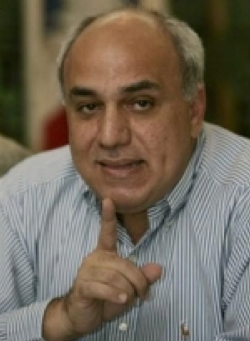 UPDATE (November 29, 2015): Pro-democracy protests, known as the "Long March for Democracy in Haiti", continue to rage throughout Haiti against the election fraud perpetrated by Michel Martelly and his PHTK party on August 9 and October 25. Despite evidence of massive fraud in both elections, the international community remains steadfast in their validation for this unabashed corruption of the democratic process in Haiti. Behind the scenes, Reginald Boulos has been instrumental in maintaining support for Martelly's corrupt project among the country's wealthy elite who in turn have been lobbying foreign embassies for their stamp of approval. At the center of it remains Reginald Boulos, the broker and go-between for Michel Martelly's corrupt regime and Haiti's wealthy elite whose families continue to cash in on the project.

Boulos is well suited for the job. He is known for having negotiated a settlement to the political crisis in Haiti created by massive protests calling for Martelly's ouster last year. It was Boulos who paved the way for the departure of then Prime Minister Laurent Lamothe to quell the opposition protests, a solution that was clearly embraced and acceptable to both Haiti's wealthy elite and the international community.

On January 19, Jacqueline Charles of the Miami Herald interviewed Reginald Boulos who stated:
“It’s the first time a sitting Haitian President has done what you usually see leaders of the modern world do: When something bad happens, say ‘the ultimate responsibility is with the president,’” said Reginald Boulos, the Haitian businessman who headed the 11-member presidential commission Martelly appointed in November to help him find a way out of the turmoil.


Here's a few facts about Boulos the Miami Herald failed to mention:


Boulos was a prime mover behind the 2004 coup in Haiti-

The G184 was led by two of the country’s most reviled multimillionaires, who are both of middle eastern heritage: (1) Andy Apaid, Jr., a U.S. citizen and the owner of Haiti’s largest sweatshops, and (2) Reginald Boulos, owner of a Haitian pharmaceutical firm whose products had killed dozens of poor Haitians.1 Both are linked to influential media corporations2 belonging to the National Association of Haitian Media (ANMH). (See pp.26-37.)

Boulos, the president of Haiti’s Chamber of Commerce, is another industrialist of Middle Eastern heritage who was a leading light in the reactionary right’s G-184. He, and his brother Rudolph, are also key to the “Haiti Democracy Project,” a right-wing, Washington-based front that used U.S. government “resources and programs and their diplomatic, State Department, Pentagon and UN/OAS [Organization of American States] connections, to help carry out the 2004...coup.” 26

Boulos has no democratic credentials-

After the recent election, Boulos, described by the Associated Press as 'one of Aristide's most ardent foes', said the private sector is "prepared to support and to unite behind the president . . . whoever it is, provided the international and national observers sanction this election as a fair one". Before the votes were fully counted, the campaign began to label the elections as "flawed".


PORT-AU-PRINCE — The link between the US government and the founding and running of the Haitian army's death squad and front group, FRAPH (Front pour l'Avancement et le Progres Haitien), was finally exposed in the October 24 issue of the US Nation magazine.

As long suspected, the Central Intelligence Agency created and has advised FRAPH. The link is Emmanuel Constant, a paid CIA employee and informant. Also, at least some FRAPH "members" were paid by the US-government-funded Centres pour le Developpement et la Sante (CDS), run by Dr Reginald Boulos and linked to FRAPH and to anti-democratic activities in the past.


94-95 U.S. SPENDING $24 MILLION ON ELECTIONS. PART OF MONEY IS
GOING TO PEOPLE LIKE MAYORAL CANDIDATE REGINALD BOULOS, WHO SUPPORTS IMF AUSTERITY FOR HAITI. GEORGE SOROS HAS SET UP SHOP IN HAITI. HE HAS WORKED HAND IN GLOVE WITH CIA IN EASTERN EUROPE AND THE FORMER USSR. HIS BACKGROUND IS TO UNDERMINE PROGRESSIVE GVTS THRU THE BALLOT BOX. TH[R]OUGH SOROS' FOUNDATIONS, LIKE ONE RECENTLY OPENED IN HAITI, MATERIAL AID IS GIVEN TO FORCES ALIGNED WITH THE U.S. LINKED TO THE ROCKEFELLERS, SOROS' ROLE IS TO PROMOTE MARKET ECONOMY. WORKERS WORLD ARTICLE BY PAT CHIN
2/23/95


More from The Twelfth Bough

Who is Dr. Reginald Boulos? 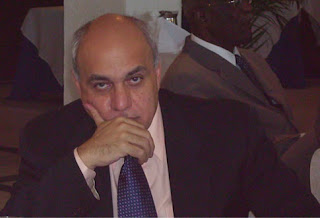 Boulos is an Arab Haitian, the son of Carlo Boulos, who was named health minister by Francois "Papa Doc" Duvalier, himself a voodoo expert who employed a ruthless security force (Tontons Macoutes) to execute opponents.

Most of Haiti's Arab community can trace their roots to Syria, Lebanon and Palestine, with a few families from Jordan and Algeria. Key dates:

• 1890: A group of 30 Arab Christians arrive from greater Syria (which then included Lebanon) in Port-au-Prince's harbor, where Italians and Germans ran many of the businesses.

• 1890-1903: The migration continues. Shunned by the elite, Arabs head to the countryside, where they peddle textiles on the streets and open businesses. They are said to have introduced the concept of ''credit'' in Haiti.

• 1912: Haitian President Michel Cincinnatus Leconte orders them to leave Haiti. He later dies in an unexplained explosion in the national palace. Arabs, fearing for their lives after some attempted to blame them, flee to Cuba and South America. Many later return; some change their last names.

• 1914-1918: Turkey aligns itself with Germany during World War I and abolishes Lebanon's autonomy, causing another migration toward Haiti and elsewhere.

• 1930s: Arabs are protected during the U.S. occupation of Haiti, but more anti-Arab laws are enacted following the U.S. forces' departure.

• 1940s: A wave of Palestinians arrive during the Arab-Israeli war.

• 1950s to present: Smaller groups of Arabs continue to migrate to Haiti. Many speak a hybrid language of Creole and Arabic. Some are owners of the country's larger supermarkets.


I am thinking there might possibly be some Sabbateans in there somewhere. But who knows.

Meanwhile, Boulos has a long history of bad medicine coupled with a love for paramilitaries.January 1996:


On October 15, [1995 - ed.] Tipper Gore, wife of Vice President Al Gore, set out on what should have been an ordinary visit to a U.S. funded health clinic serving the poorest section of the capital of the poorest country in the hemisphere. But the day quickly degenerated from feel-good photo-op to fiasco. Residents of Cite Soleil, a sprawling slum on the edge of Port au-Prince, Haiti, broke up the event with a barrage of stones.
Although the U.S. press initially reported the incident as an anti-American protest,the rocks were aimed not at Mrs. Gore's entourage, but at Dr. Reginald Boulos, the Haitian director of the clinic and an influential power broker long associated with the country's right-wingparamilitaries.

(See: paramilitaries, a scourge on humanity.)

Boulos' group of clinics, the Centers for Development and Health (CDS, by its French initials), is AlD's [USAID - ed.] richest beneficiary in Haiti, and Boulos the most visible symbol of its influence. In their demonstration last October, Cite Soleil residents were attempting to highlight the way Boulos has used CDS as a tool of political influence. Not only does CDS generate more than $5 million a year in international revenue- it also, not coincidentally, provides a large market for Phar-Val, a pharmaceutical distributor and one of several businesses Boulos controls with his brother.

More nefarious still are Boulos' political ties. He has been linked, notably in articles by Village Voice columnist James Ridgeway and The Nation's Allan Nairn, to FRAPH, the paramilitary death squad ushered into power by U.S. intelligence during the coup led by Lleut. Gen. Raoul Cedras. ...

AID boasts that it delivers primary medical care to 3 million Haitians through contractors like Boulos' clinic. In fact, it has served to advance a central U.S. foreign policy priority in the Third World-population control. Nearly half of the agency's health care spending in Haiti is taken up by the Private Sector Family Planning Program, under which so-called NGOs dispense birth control methods, and each of the other programs-including the "Expanded Urban Health Services" program, which funds Boulos' CDS-has a substantial family planning component.

You can click through to read the horror stories of forcing Haitian women to have the implant contraceptive Norplant, which caused many of them to bleed for long periods unabated and have many other complications.

Here you can read about his media ownership, along with Andy Apaid, Jr., and his role in selling poisonous cough syrup that killed 88 children in 1996, and using an experimental measles vaccine up to “500 times” stronger than normal on another 2,000 infants.
In addition, he is also connected to the "suicide" of a UN commander in 2006.

Amid tremendous controversy over Haiti's security situation and the on-again, off-again elections, the military commander of UN forces in this beleaguered nation apparently took his own life early Saturday morning. After having assumed command of the UN military mission less then four months ago, the body of Brazilian officer Lt. Gen. Urano Teixeira da Matta Bacellar was found sprawled out on the balcony of the Hotel Montana, the apparent victim of a self-inflicted gunshot wound to the head. According to several sources in the Haitian press, Bacellar had participated in a tense meeting with the president of Haiti's Chamber of Commerce, Dr. Reginald Boulos, and Group 184 leader Andy Apaid the night before.

Bacellar's death comes on the heels of Boulos's announcement of a nationwide general strike on Monday aimed at forcing the UN mission to get tough with bandits in Cite Soleil. The term "Bandits" is often seen as a code word for Lavalas [Aristide - ed.] supporters, and Cite Soleil has served as a launching site for massive demonstrations demanding the return of ousted president Jean-Bertrand Aristide. Mario Andresol, the current Chief of Police, representing the US-installed government of Gerard Latortue, recently alleged that the community was also being used by Columbian drug traffickers and "certain political forces" to hide victims of a recent spate of kidnappings in the capital.

This is not the first time Dr. Boulos and Haiti's business elite had pressured the UN to act against supposed bandits in the capital. Last May, Boulos and the ultra-right Haitian Chamber of Commerce had sought to cover-up accusations of human rights violations committed by the Haitian police using similar tactics. An HIP article dated June 12, 2005 entitled, "There is no political persecution in Haiti" reported:

In the absence of holding the police accountable, the only thing lacking was an official justification for the U.N.'s continuing collaboration with the police and turning a blind-eye to their human rights record. On May 27, this justification was provided by the Haitian elite and delivered by the President of the Haitian Chamber of Commerce and Industry, Dr. Reginald Boulos. During this meeting between the business community and Haiti's Chief of Police Leon Charles, Boulos demanded the U.S.-installed government of Gerard Latortue allow the business community to form their own private security firms and arm them with automatic weapons. This was clearly a demand to legalize the business community's own private militias to kill what Boulos, and others in his circle, have referred to as "Lavalas bandits." Boulos also suggested the Latortue regime allow businesses to withhold taxes for one month and use the money to buy more powerful weapons for the police on the international market. These statements served the dual purpose of pressuring the U.N. with the image of government sanctioned private militias killing off Lavalas supporters while providing another pretext for the Bush administration to lift the 14 year-old arms embargo against Haiti. "If they don't allow us to do this then we'll take on own initiative and do it anyway" Boulos threatened.

He's a big fan of paramilitary force against "bandits," aka poor Haitians.

Posted by Haiti Information Project (HIP) at 12:19 AM No comments: