We will never forget you Father Gerard Jean-Juste 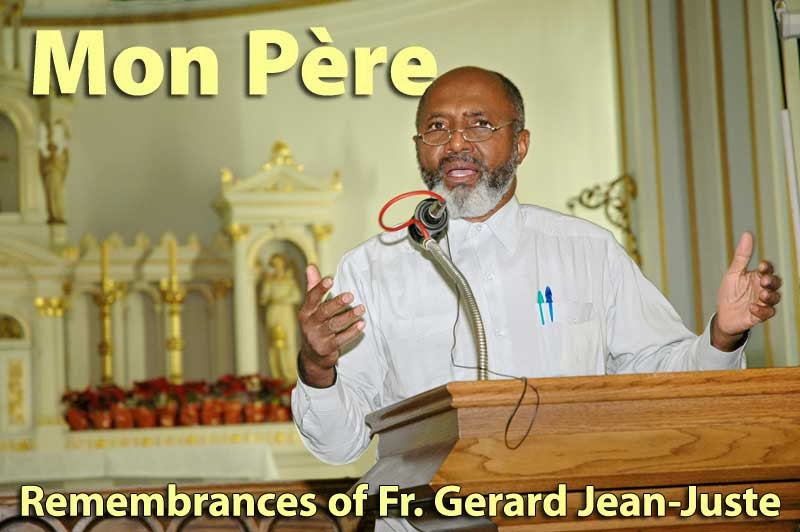 I called Fr. Gerard Jean-Juste 'my father' as did so many others who worked with him and loved him for his courage, commitment and generosity. I first met this incredible man after the first coup against Aristide in 1991. Another Catholic liberation theology priest, Fr. Jean-Marie Vincent, introduced him to me. I had returned to Haiti to continue filming for my documentary Haiti: Harvest of Hope.

When I returned to Haiti Fr. Vincent told me that there was another priest assigned to the parish of St. Gerard in the capital of Port au Prince who was protecting and hiding those targeted by the military repression. At great personal risk and never asking anything in return, Fr. Jean-Juste developed an underground network of non-violent resistance to the military and police repression. His network would later expand to include opposition to the paramilitary forces created by the CIA such as the Front for Advancement and Progress in Haiti or FRAPH.

Fr. Jean-Juste was always clear in his intention. To console me after the assassination of Fr. Vincent in Aug. 1994 he said, "There is no such thing as a safe harbor against such brutality except in your own conscience. No matter how hard they try to kill the thirst of the majority of the poor for a better life in Haiti, their brutality and tactics only provide more water for our struggle. We must never let them set the terms for the liberation of the majority of the poor in Haiti with their acts of violence. We must always stay focused on the goal."

After Aristide's return to Haiti in 1994, Fr. Jean-Juste remained an anchor for the Lavalas movement that he believed represented the interests of the poor majority until his death this last Wednesday in a Miami hospital. For this conviction he would suffer dearly especially after accepting an assignment to St. Clare's church in the neighborhood of Ti Place Cazeau in Haiti's capital. Once there, he would continue to not only preach on behalf of the rights of Haiti's poor majority but would also put his faith into practice by creating community empowerment projects. These included literacy and economic programs providing the poor with opportunities to lift themselves out of poverty and a daily canteen that made hot meals available to the most vulnerable in the community. It was not uncommon to find him singing while serving meals to poor children, who he adored and honored as the future of Haiti, on any given afternoon at St. Clare's.

Following the second coup against Aristide in 2004, he lost his weekly radio program at Radio Ginen after anonymous threats against the station. He would never blame the owner of the station telling me, "I understand the forces of repression and the lies they tell have taken control of Haiti for the moment. They are trying to convince the world that our beautiful movement of the poor is ugly and desolate. Aristide was kidnapped after the elite cut a deal with the Bush administration and this much is clear, the repression against Lavalas has started again."

Fr. Jean-Juste would continue to preach that Lavalas was a beautiful movement of the poor while most of the world fell prey to a systematic campaign to label and isolate it as a violent aberration. He would use every opportunity to condemn the second ouster of Aristide as a "coup-napping" that relied upon the brutal force of the former military and death squads who had invaded Haiti from the Dominican Republic in early February 2004. Fr. Jean-Juste described the situation as, "The Bush administration hiding behind the pretext of death squads and the military to justify kidnapping our democratically elected president." This insistence earned him the love and respect of Haiti's poor majority along with regular condemnation and death threats from supporters of the coup.

Fr. Jean-Juste along with many others considered September 30, 2004 a true test and turning point for the Lavalas movement in Haiti. The Haitian police opened fired on unarmed protestors during a demonstration on the thirteenth anniversary of the first military coup against Aristide. The slaughter would be justified by Jean-Claude Bajeux, a so-called human rights advocate and leader of a ‘civil society organization' called the Group 184 that worked for Aristide's ouster. Bajeux claimed that Lavalas partisans had emulated terrorists in Iraq and beheaded police officers earlier in the day. The Latortue regime ran with it and borrowed Bajeaux's unfounded assertion that it was part of a terror campaign by Lavalas called "Operation Baghdad." The international community, already compromised and cajoled by the Bush administration, stood poised and ready to accept any explanation that provided a counter argument to the massive demonstrations in the streets calling for Aristide's return. The demonstrations were proving an embarrassing reminder that the so-called opposition to Aristide was really a minority and that he never lost the support of the masses of the Haitian people as they had claimed.

Associating Lavalas with terrorists in Iraq was a marketable product in the international press that would not only distract from the growing demonstrations but also serve to justify the increasing repression. In actuality, it was a continuation of the strategy the Bush administration had employed against the popular Haitian folksinger Annette Auguste in May 2004 justifying her arrest by claiming she was organizing with Muslims in a local mosque to attack U.S. Marines in Haiti.

Attempts by the Latortue regime and the international community to label Lavalas as a terrorist organization with Operation Baghdad were always ludicrous. Fr. Jean-Juste with his usual clarity would state, "Bush and the Organization of American States are trying to equate the resistance against the coup by the poor with Al-Qaida and Iraqi terrorists. The OAS is bought off and a disgrace to the memory of Haiti having helped Bolivar for the emancipation of Latin America. They along with the U.S., France and Canada are siding with the elite in Haiti who would rather use this foreign label to brand the Lavalas movement as terrorists than accept their own responsibility for having driven this country into the ground with their own greed."

The Latortue regime and its allies believed that Operation Baghdad had finally provided them with the excuse they needed to destroy Lavalas and repress its most vocal supporters. High on the list was Fr. Jean-Juste. After Sept. 30, I heard several radio interviews with Haitian police spokesperson Jesse Coicou accusing unnamed priests of harboring and assisting gunmen involved in Operation Baghdad. I knew whom they meant and called Fr. Jean-Juste to make sure he was safe. He seemed unconcerned and reminded me that part of their goal was to frighten any one who opposed the coup into silence. He finished with "It is in God's hands and we have to keep talking about what's really going on here. We have to keep doing our work."

On October 13, 2004 the UN allowed the former brutal military to ‘officially' enter the capital of Port-au-Prince unchallenged. As they paraded through the streets waving automatic weapons and promising to kill ‘Lavalas bandits,' Fr. Jean-Juste was serving meals to the children at St. Claire's parish. As the children ate, heavily armed police wearing black ski masks surrounded the church before entering the premises with their guns drawn. As the children watched in terror they brutalized Fr. Jean-Juste before dragging him out and throwing him into the back of a waiting police car.

Fr. Jean-Juste's arrest came in the midst of a campaign of unprecedented slaughter and mass arrests throughout Oct. and Nov. 2004. It was clearly meant to silence his criticism of what he considered crimes against humanity being committed by the Haitian police against poor communities in the capital. The repression and his arrest were justified by Operation Baghdad, as the Latin American countries in charge of the UN military mission, namely Brazil, Chile and Argentina, remained silent and continued to provide support to the Haitian National Police.

Despite the reality that no warrant was ever produced nor any evidence linking Fr. Jean-Juste to a crime ever presented, he was held in prison for more than six weeks. He was finally released under the cover of darkness at 2 o'clock in the morning on Nov. 29 to avoid the spectacle of thousands of Lavalas supporters gathering to celebrate the news. I called him later in the day to express my joy and arrange another interview. All he would say was "Kev, get over here. We can't start the party without you."

Fr. Jean-Juste began giving interviews right after his release in which he condemned the U.S., France and Canada for their role in the coup and the UN for backing the repression against the Lavalas movement. He declared that Latortue was leading a ‘regime of terror' and chastised the UN for their "despicable role in providing support to the Haitian police as they unjustly murder and jail thousands for their political convictions." It was statements like these and his popularity among the poor that made him an even larger target for the Latortue regime. All they needed was the right circumstances and a new pretext for hauling him back to prison. Fr. Jean-Juste knew this but refused to remain silent.

Kevin Pina is a journalist and documentary filmmaker who has covered events in Haiti since 1991. As well as considering him a close friend and mentor, Pina interviewed Fr. Jean-Juste many times over the past 19 years. Interviews and personal conversations between the author and Fr. Jean-Juste form the basis of this article.
Posted by Haiti Information Project (HIP) at 3:04 AM No comments: